Members and sympathisers of the opposition Social Democratic 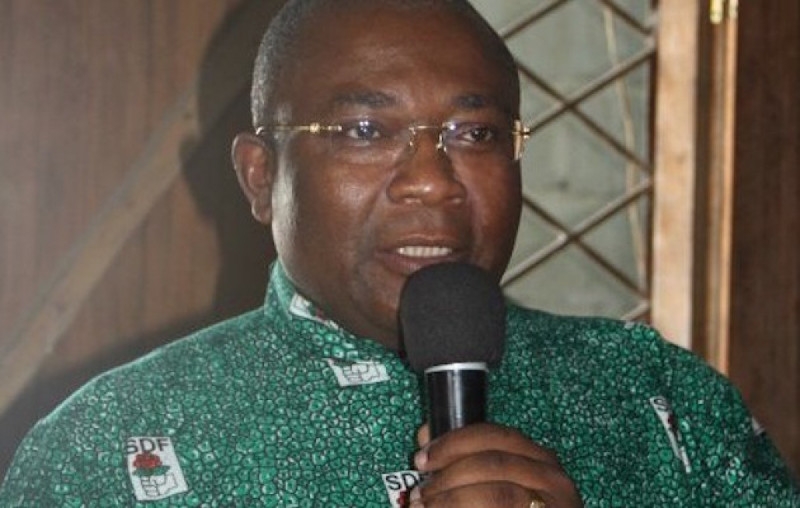 Members and sympathisers of the opposition Social Democratic Front, SDF, party in the Littoral Region headed by Hon. Jean Michel Nintcheu are fuming over the trampling of the party’s prerogatives and the law in the process of replacing its deceased deputy Mayor of the Douala I council.

Lotin Same the fourth deputy mayor who died a few months back was replaced by Edimo Same who does not carry the support and endorsement of the party, in very controversial circumstances.

According to them, Edimo Same, militant of the party was not invested by the National Chairman of the SDF, Ni John Fru Ndi as well as the National Executive Committee, NEC.

Jean Michel Nintcheu, Littoral Regional President of the SDF party states that the provisions of article 60 paragraph 1 of the 2004 law laying down the rules applicable to councils have been violated, following the replacement of the said deputy mayor.

According to Nintcheu, “this article clearly states that the mayor is elected by a single-member ballot and deputies to the mayor are elected through a list system. It is clear from the law that the list of deputy mayors is elected and not a deputy mayor.”

He argues that for there to be an extraordinary election for the replacement of a deputy mayor, “it would be absolutely necessary to put the list of deputies on the table and proceed with the election of the whole of this list”, which he maintains has not been the case.

SDF militants are also angered over the fact that Lengue Malapa, Mayor of the Douala I Council has violated the law: “With the active complicity of municipal councillors mainly from his party the CPDM, he chose one of his ‘comrades’ to replace the late deputy mayor of the SDF”.

Nintcheu also says that “the complicit silence of the Senior Divisional Officer, SDO of Wouri Division, supervisory authority over the council, once again proves that the objective of this totally illegal manoeuvre is to weaken at all costs the opposition political parties in the Wouri Division”.

According to the SDF Littoral Regional President, “what happened in Douala I is too much of a provocation. Those who have been involved in the rape of the texts to the point of violating the provisions of the law as well as the directives of the National President of the SDF will take full responsibility for everything that follows…we cannot accept that the CPDM with the complicity of the administrative authorities decides who will replace a deputy SDF deceased mayor, this is unacceptable and the administrative supervisory authority will have to assume the consequences that will ensue if this masquerade is validated”, he warns.

It should be recalled that during the session as of right in October 2013, the list of deputies consisted of three deputies of the CPDM and a deputy of the SDF; the fourth deputy of the SDF invested by the national president John Fru Ndi, was then presented to the Douala City Council for voting.

Gross Violation of The Law

Reacting to the ‘controversial’ elec- tion on June 22, the SDF Deputy Mayor of Douala II, Jean Robert Wafo, according to the Law, the election of Deputy Mayors is different from that of Mayors.

He said Section 60 (2) of the 2004 law pertaining to the election of Mayors; state that Mayors are elected on a nominal basis, which means that each Councillor, who is interested in the post of Mayor can stand as a candidate.

Wafo said Section 60 (3) pertaining to the election of Deputy Mayors holds that Deputy Mayors are elected on a list system. On what is needed to fill the vacant post of 4th Deputy Mayor, Wafo said since the three other Deputy Mayors are still in office, the SDO would have, simply installed Ntone Ebelle as presented by the SDF. Wafo insisted that the SDO’s decision is a gross violation of the Law.

The Communication Minister of the SDF Shadow Cabinet said the party will file a motion at the Littoral Administrative Court on the illegality surrounding the election of Edimo Same as 4th Deputy Mayor.

On his part, the SDF Littoral Regional Chairman, Hon Jean Michel Nintcheu, decried the violation of the Law by the SDO to favour a pro-CPDM candidate. Nintcheu rejected the election of Edimo Same and said it was inadmissible for the CPDM to decide for the SDF.

The Littoral SDF boss warned that there will be serious consequences if the so called election of Edimo is validated.

Meanwhile, some SDF militants that The Post talked to said they are further irritated in the neighbourhoods by CPDM militants, who are making a mockery of the SDF Chairman that he has no power in his party.

The militants are calling on the party to dismiss Edimo Same from the SDF for anti-party activities as contained in Article 8.2 of the party’s Constitution.