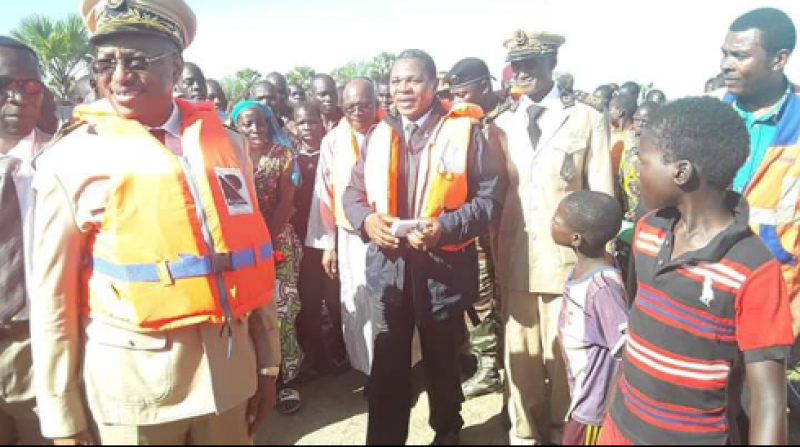 Atanga Nji Paul, Cameroon’s Minister of Territorial Administration has on behalf of the Head of State, President Paul Biya, delivered a message of comfort and relief materials to victims of floods in the Far North Region.

In the Logone and Chari Division, just like in the Mayo-Danay Division of the Far North Region, the Minister used Friday’s visit to assess the destructions caused by an overflow of River Logone.

“President Paul Biya has instructed me to come on the field and have a working session with the Governor, Senior Divisional Officers and the Divisional Officers in order to have a comprehensive report on the situation,” the interior minister said Friday.

Reports have it that the flood waters from River Logone went beyond Maga, spreading through the Logone and Chari and Mayo-Danay Divisions. With the water levels yet to completely go down, the hope is for the sun to dry it up.

With thousands now left homeless, and exposed to starvation, diarrhoea, malaria, cholera and many others, Minister Atanga Nji says the Head of State had to urgently send him to the affected areas with relief assistance to the population. In Maga, he said the findings will be forwarded to Government for urgent action.

His words: “…And it is very vital to have this report because we will forward it to the Prime Minister, Head of Government who will forward same to the Head of State. And whenever President Paul Biya has the right information, he acts in time.

“And we should understand that this is not the first time we are having the floods here. On the 12 of September 2012, President Paul Biya came here himself because we had heavy floods. And we are in the same region, but the thing is that, now, we have the Mayo-Danay Division as well as the Logone and Chari Division affected. So, it extends from this Division to another division. And you can see the Chadian Republic the other way, and these flood waters, we are told, comes at times from Chad and from the Adamaoua Region and concentrates here. So, no matter the strength of the infrastructures we have, they cannot withstand the strength of the rain. Now, we will have a technical report from the competent authorities.

“The population is suffering. We have brought relief assistance for the local population and this is a sign that President Paul Biya is always at the service of the people in their time of need. I think that the journey to Maga has been successful.”