Archbishop Julio Murat, apostolic nuncio of the Holy See to 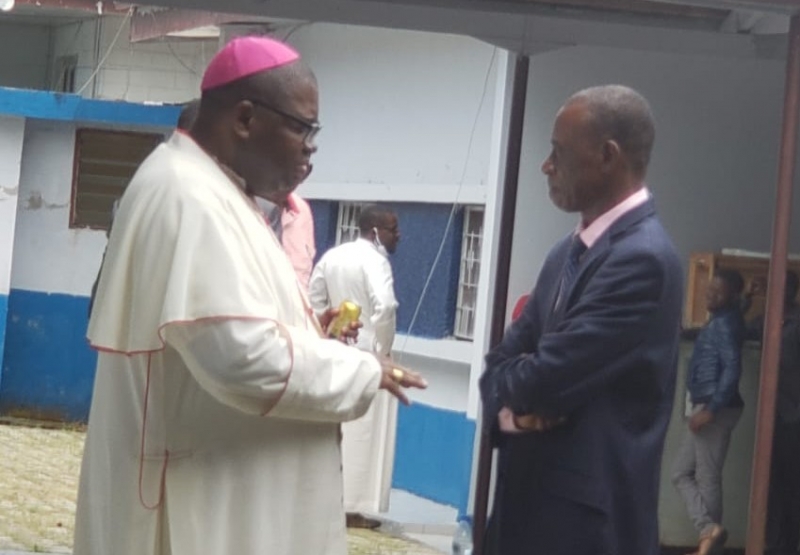 Archbishop Julio Murat, apostolic nuncio of the Holy See to Cameroon and Equatorial Guinea has renewed the confidence of the Holy Father Pope Francis on Bishop Michael Miabesue Bibi, Apostolic Administrator of the Roman Catholic Diocese of Buea.

The Apostolic Nuncio’s dispatch dated June 15, 2020 comes to set the records straight following dissents that greeted the appointment and transfers of some priests within the diocese.

Appointed December 28, 2019 as Apostolic Administrator of Buea, Bishop Bibi on May 29, 2020 appointed and transferred some priests within the diocese. The action of the Bishop generated a lot of noise, especially within the ranks of hitherto ‘untouchable’ priests and institutions. The decision placed Fr. George Nkeze Jingwa on sabbatical in the U.S., and a June 11decision replaced him as Pro-Chancellor/President of the Catholic University Institute of the Diocese of Buea, CUIB.

In a letter of complaint addressed to the Administrative Board of the International Federation of Catholic Universities (IFCU), Barrister Sobe Clive Ndikum, ‘writing on behalf of CUIB’, described Fr. George Nkeze’s dismissal as “improper interference”.

The June 11 petition says the decision of the Apostolic Administrator of the Diocese of Buea “may put in jeopardy the role of Father George Jingwa Nkeze, President, CUIB, Vice President of IFCU, and IFCU Regional President for Africa.”

The lawyer is of the opinion that as Apostolic Administrator, Bishop Michael Bibi is not empowered to carry out any major change or decision which is for the new bishop to make. “The newly appointed Administrator has caused irreparable damage and mistrust amongst students, faculty members, the laity and other well-wishers of our Christian Community by making uninformed, ill-advised and rash decisions beyond the scope of his mandate and authority as an administrator.”

Barrister Sobe, counsel contracted for CUIB by ousted President Nkeze, says “Bishop Bibi’s actions have reached unprecedented levels of commotion resulting to publications of articles a reasonable person would consider not kind to the Bishop or the position he holds.”

According to the lawyer, CUIB is autonomous and its Board of Trustees is supreme over the office of Bishop, talk less of that of Apostolic Administrator. He therefore calls on the International Federation of Catholic Universities, an organisation of over 200 Catholic universities throughout the world, to bend Bishop Bibi’s hand so he can reopen and restore the status quo of of CUIB Bank accounts and get Fr. Nkeze reinstated to complete his presidential mandate expected to expire in 2023.

The Apostolic Nuncio has however rubbished the claims of the lawyer. Following the high instructions of the Congregation of the Holy See for the Evangelization of the Peoples, Archbishop Julio Murat said: “The Apostolic Administrator is the legitimate authority over all priests, Religious and any other mission personnel within the Diocese of Buea and reserves the right to appoint, transfer, remove or dismiss persons according to the prescriptions given to him by the Holy See.

“The same Apostolic Administrator is responsible for all temporal goods and patrimony of the Diocese of Buea and of all the Diocesan Institutions and is answerable directly to the Holy Father through the Apostolic Nunciature in Yaoundé.”

Apostolic Administrator Bibi, emboldened by the renewed confidence, put out a statement on Tuesday reminding all and sundry that he is the “sole legitimate authority over the Diocese of Buea”. He went further to declare that Barrister Sobe Clive of Intellectum Law Firm has not been authorised to institute any action on behalf of the Catholic University Institute of Buea.

Bishop Bibi went on to chair a meeting of faculty and staff of CUIB, in the Conference Room of the Bishop’s House in Small Soppo, in his capacity as Chancellor/Pro-Chancellor.