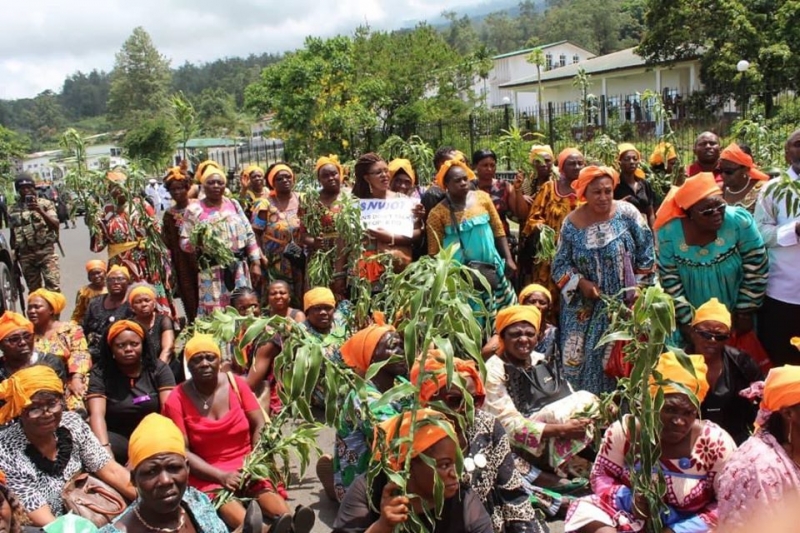 Human rights and civil society groupings have condemned Chris Anu, Secretary for Communication and IT of the Ambazonia Interim Government after he ordered armed separatist fighters to attack members of the South West North West Women’s Task Force, SNWOT.

Chris Anu dished out the orders Tuesday in reaction to a SNWOT communiqué made public on Monday. In the dispatch, Sally Mboumien, General Coordinator, South West North West Women’s Taskforce (SNWOT) said the civil disobedience strategy of imposing lockdowns and ghost towns only drowns an already very feeble people into the rivers of more pain and misery.

The women said they are passionate about restoring sustainable peace and encouraging initiatives and actions that are geared towards alleviating the plight of feeble communities.

“We expect everyone to be empathetic, with IDPs, the vulnerable group (PLWD), aged, women, girls, and children, who are now living in abject poverty and deplorable conditions due to the on-going socio-political crisis plaguing the North West and South West regions. This deplorable situation has been aggravated with the presence of the COVID-19 pandemic,” SNWOT’s General Coordinator wrote. “We, therefore, decry the constant use of lockdowns as a strategy for civil disobedience within the on-going crisis. This strategy only drowns our already very feeble people into the rivers of more pain and misery.”

Mboumien posited that if the priority remains the well-being of humanity, then this civil disobedience strategy of calling for lockdowns should be revisited, for the people of the North West and South West Regions of Cameroon need to enjoy their fundamental human rights to an adequate and decent standard of living.

In a shocking outing, Chris Anu described the women as “blacklegs and traitors to the revolution”. He went as far as alleging that as humanitarian workers, the women have been the ones giving out information to the military about the positions of the camps run by the non-state armed groups.

As Paul Tasong, National Coordinator of the Presidential Plan for the Reconstruction and Development of the North West and South West Regions began a 12-day fact-finding and awareness mission to the restive area, Anu took to social media on Sunday to call for a three-day lockdown. In his call, he observed that the lockdowns were weighing down on the population, the same opinion expressed by the women in their communiqué.

Anu took 2018 and 2019 pictures and videos of the women and alleged that they were images from a protest staged on June 22, 2020.  “They came out yesterday protesting against the lockdown. They are saying that it is unnecessary,” said Anu. “These are enemies of this struggle. They are enablers. They are the people who are selling our restoration forces. They are very dangerous.”

Without mincing words, Anu ordered members of the non-state armed groups to attack the women – kidnap and/or even ensure they do not live.

“They should not live near you. They are selling us for contracts. They should not be seen talking peace. Let us locate them one by one and go after them let them begin to explain.  We must stop those women,” said Anu.

He failed to tell his audience that these are the same women who confronted Prime Minister Joseph Dion Ngute in Bamenda with the grievances of the people. Anu also failed to say that SNWOT has been calling the government to account for several incidents including the killing of the baby in Muyuka and the killing of women and children in Ngarbuh.

Speaking on the line to Buea, Human Rights Lawyer Nkongho Felix Agbor alias Agbor Balla, President of the Center for Human Rights and Democracy in Africa, CHRDA, said it is intolerable for civilians and aid workers to be attacked by members of the non-state armed groups.

He described Chris Anu’s utterances as an attempt to incite hatred and violence.

“It is insensitive and a blatant incitement of hate and violence against civilians. If anything happens to any member of the South West North West Women's Task Force, it would be punishable by existing laws,” Agbor Balla said. “These are women who are in the field struggling to provide humanitarian assistance and basic help to those badly affected by the crisis. Any attack on civilians and/or humanitarian workers is intolerable. I condemn it in very strong terms. At the end of the day, who are these people fighting for?”

Contacted on Wednesday evening, Sally Mboumien, General Coordinator, South West North West Women’s Taskforce (SNWOT), said she was taken aback by the comments made by Chris Anu. She said it was unfair for Anu to use old pictures and videos to run an untrue narrative.

Hear Mboumien: “Secretary Chris as one of the leaders who have an opinion in this conflict, we respect him. But I am just taken back after, the live show he had yesterday, on what he said about SNWOT and the women. I wonder why he had to tell a lie that we were in the streets protesting, took pictures of lamentation campaigns in 2018 calling for an inclusive and sincere dialogue as well as an uplift of the ban on schooling in the NW/SW regions and the call for women to contribute their voices in ending the conflict campaign that we did in 2019 and is talking that we were in the streets a few days back to protest lockdowns.  I don’t think that is fair; if we want to have change within our communities, we must work with truth so that we can have a better community.

“Secondly, I wonder why he should insult and question the women’s integrity and womanhood as well as assume about us the women because we are a people that have given to them as parties in conflict and the entire whole what we stand for and we have not changed. SNWOT is out to see how women can significantly contribute in ending the conflict that is going on in the North West and South West Regions and to make sure that women are included in decision-making processes.  And we have not changed from that goal; we are not a partisan group, but a group that talks about the situation and the wellbeing of women, most especially in conflict times as we advocate for a peaceful resolution of the conflict.

“I equally wonder why Secretary Chris will call for women to be attacked and violated when we merely stated our opinions on lockdowns following our interactions in the field. It is particularly alarming because I listened to him, Secretary Chris, acknowledging that lockdowns are not good for the people while he was making this same call for lockdowns on the 21st of June 2020.

“This is no fight amongst us. It is a fight of opinions of political leaders. Our role has been to call for a peaceful resolution of the conflict and will be till we get a peaceful and sustainable community. I will also repeat the fact that SNWOT is calling on all warring factions to silence the guns preferably through an agreed ceasefire and work together through a negotiated settlement for sustainable peace and development to return to the regions. This will enable the people to have their lives back.”